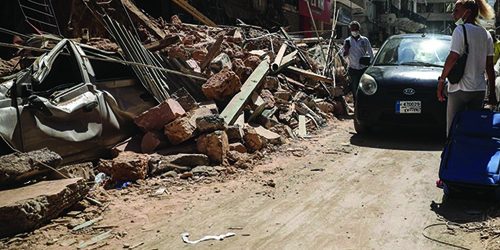 On the night of the 4th of August Lebanon witnessed a human tragedy; 2,750 tons of ammonium nitrate (equivalent to around 1.2 kilotons of TNT) stored at Beirut’s port blew up causing widespread destruction in the Lebanese capital.

The explosion was like 15 years of war in 15 seconds, the level of destruction is hard to believe and it is everywhere.

At least 8,000 buildings, many concentrated in the historic quarters of Gemayze and Mar Mikhail were affected including residential buildings, schools, hospitals and around 640 historic building 60 of which are at risk to collapse.

Today, the capital reflects the hearts of the nation, broken, shattered in pieces, burned down, crumbling in pain and desolation and today more than ever we need to unite and rebuild our city one stone at a time.

Rotary Beirut Cedars will be taking in charge the rehabilitation of schools in order to ensure that the institution will be able to open its doors before the beginning of the new education year and secure the new generation will always be able to learn and secure a bright future despite everything our beloved country is going through.